Language study has long fascinated me, and as a recent post may demonstrate, so has baking. I recently read Words to Eat By: Five Foods and the Culinary History of the English Language

, an interesting history of five historically English food staples, and their storied history of nomenclature. The apple is one of these such foods, the only fruit native to Great Britain, though there it was more associated with the crab apple than the larger and sweeter varieties that we routinely eat today.

The apple is believed to be one of the first fruits that was cultivated; with over 7,500 cultivars all stemming from a common ancestor of Malus sieversii. Most are created through grafting, as the apple plant is extremely heterozygous, meaning that it doesn’t just inherit DNA from its parent plants, but can differ dramatically. Combine that with the large genetic sequence (an apple tree has almost twice the number of genes as a human), and the fact that they are triploids (3 sets of chromosomes, which don’t divide evenly), and wild variations are hard to come by. Were humans to stop grafting and cultivating apples, they would eventually return to a state more like the wild ancestor that they are derived from. Throughout all of our meddling though, some amazing varieties in shape, size, color, russeting, and flavor, along with factors important beyond taste, such as habitable climates and ability to store and travel well.

The bible does not state what kind of fruit grew on the Tree of Knowledge, but it was not always represented as an apple. The type of fruit most likely envisioned by the writers would have been the contemporary pomegranate or some similar fruit, but popular culture holds that an apple is what Eve was tempted with. Renaissance painters would draw from Greek mythology in their Christian interpretations, and golden apples have a sordid history in Ancient Greece. Combined with the homophonous nature between the Latin words for apple and evil, and the world’s most popular fruit is branded as a thing of sin. Indeed, the popularity of the apple exceeds any species, as the word for apple in many languages and cultures is synonymous for the term for “fruit” in general. Try it. Close your eyes and think of the word fruit, and see what comes to mind.

By the way, the pie came out smelling and tasting wonderfully, and is definitely something that I will try again.

I like to bake, this is no secret. Also common knowledge is the fact that I am not always very good at it. Like when it comes to making cupcakes, for instance.

Especially when it comes to making cupcakes.

I love the little treats. I get to snack on a piece of cake and have a little bit of self restraint too (insomuch as I’d be eating a slice the size of my face if given the option). I want to be able to make them at home though, and not have to go out every time I get the fix. Plus, I see all of these amazing flavors and concoctions online, and figure that the deliciousness of some of these photos is something worth attaining.

I have had my share of failures, and then some. Many are my fault (trying new recipes when I don’t have old ones down, misreading and using baking soda instead of baking powder or vice versa), but sometimes I feel like making the perfect cupcake is just not something that I can do. I’ve had monstrosities emerge from the oven, feebly raising their malformed little cupcake arms and begging for a merciful end to their short existence. Today I went for a low fat recipe, replacing the butter with some oil and yogurt. They didn’t fall, they didn’t burn, they puffed up nicely, albeit more than I intended since I overfilled the papers. They did, however, come out tasting a bit of cornbread, as my last attempt of “healthier” cupcakes went. My attempts at frosting then went awry as I tried using a decorating tube with frosting that was a bit too thick. I got random squiggles out of it, making them even more pathetic than before.

I know I should probably just stop. I’ve wasted far too many sticks of butter and cups of flour on my futile attempts at sugary goodness. I should pack away the frosting bags and baking tins and call it a night. And yet…

I found this vanilla cupcake recipe with frosting and sprinkles that looks amazing!

Yes, I have to admit, I already have a bit of a problem with my first month of challenges. Even giving myself foods that I can eat, it turns out the temptations of processed cheese were a bit too much for me yesterday. 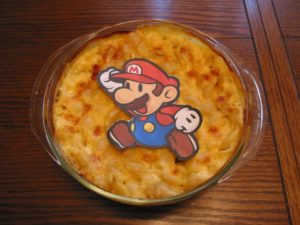 Someone who will not be named was telling me that he didn’t want to be the cause of my slipping up on the month of veganism, while at the same time cooking homemade whole wheat macaroni and cheese, and proclaiming what a great cook he is. It was after everything was done and “Jurassic Park” was rolling that we began to eat, he the macaroni and cheese, and myself pretty much half the snacks in the apartment. It was only after he was near done with his plate that I decided that I had to have some. And it was delicious. And I don’t really regret it.

I figure that it is a personal thing; that I am working on trying more foods and using the constraint to think differently about what I put into my body. It is not an exercise in deprivation, but in broadening of scope. Considering the last time that I had homemade macaroni and cheese was at least a year ago, I am alright with experiencing it (and it was delicious). Future challenges will involve more broadening of scope, like maybe baking vegan cupcakes that taste more like cake than cornbread, or trying to eat something different each day. Maybe it’s me rationalizing, but I’m thinking that as a personal improvement challenge, I’ll get it off my chest now that I won’t beat myself up about it, and figure that if anyone else does, they have a different idea of what it is that I’m trying to do.

By the way, it was Daniel. Totally Daniel.