I spent a part of my morning watching the documentary ‘The Transcendent Man’, about the works and ideas of Ray Kurzweil. He is known as one of the inventors of the flatbed scanner, as well as the Kurzweil Reading Machine for the blind, music synthesizers, and other technological devices. He is also an author and futurist, whose idea of the Singularity as an evolutionary path merging human consciousness and technology. His meetings with other academics, as well as popular figures, such as Colin Powell, Jon Stewart, Stevie Wonder and William Shatner amongst others illuminate his ideas on the progression of mankind. 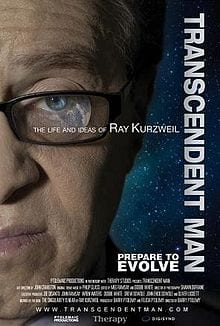 Kurzweil has made many predictions on the future over time, with many coming to pass, and proving personal successes for his businesses and ideas. Extrapolating forward, he has pegged dates of mere decades in the future as to when humanity will irrevocably merge with machines. For instance, based on the progression of computer capabilities, he imagines that in the year 2029, a computer will have the processing capability of all of the brans in the human race. Only shortly thereafter he envisions the rate of technological growth to become too fast for any one mind to keep up with. It is at this point, or prior, that we will merge with machines and in effect become immortal.

It is clear, in his words and actions, that Ray Kurzweil refuses death. The case could be made that he fears death, and his diet and exercise regimen in addition to the reportedly 200 separate pills and supplements that he takes a day could be his attempt to live long enough to see his visions come to pass. His belief is that soon the life expectancy of the average person will increase more than a year every year, thereby indefinitely stretching lifespan. Included in this vision is the merging of the human brain with computers, so that we can back up our minds, enhance cognition, add extra memory, and even use the DNA of dead people to bring them back to life. Possibly tongue-in-cheek, but he states that he now sees something useful in cemeteries, which were previously pointless to him, as they are a stockpile of genetic matter for those that we miss.

His feelings toward our merging with computers, and what that means for the future of humanity, definitely make Kurzweil more transcendent than the average person. Most people, myself included, have a knee-jerk reaction when it comes to this future pace of advancement, and the inability to know what it means for us, or how much change can be made while we are still defined as human. The point can be made, however, that we will all be experiencing it together, and that it won’t be a matter of the computers taking over or anything, as we will in essence be the computers. Still, I’m trying to wrap my mind around it a bit, and finding it difficult to relate to how we live currently and what this future vision promises. As the idea of singularity implies, no one can really know what will happen when it strikes, as a fundamental paradigm shift in the universe will occur, and a new form of evolution will begin.